Tech Deck Live Development
In 2006, Spin Master Ltd. opened up an in-house digital games studio for online games based on Spin Master's toy IPs. I was brought on to start up the art department at the newly-formed Spin Master Studios Inc., eventually growing it over two years from a one-man show consisting of just myself to a full-fledged 3D modeling, animation, and graphic design division of around a dozen artists at any given time.

Our first big project was Tech Deck Live, a browser-based Shockwave game based on Spin Master's Tech Deck line of finger skateboards. It looks pretty primitive now - 2008 was an eternity ago in internet time - but cramming this level of 3D gameplay with online multiplayer into a browser was revolutionary for the time. It took some serious networking tricks on the back end; the guys at Shockwave were surprised we were able to pull it off at all.

Due to the age of these archived screen shots and assets, high-res versions no longer exist, so they're not as pretty as some of the other images on the site.


Tech Deck Live went offline in 2010, but you can still find low-quality online videos on YouTube. 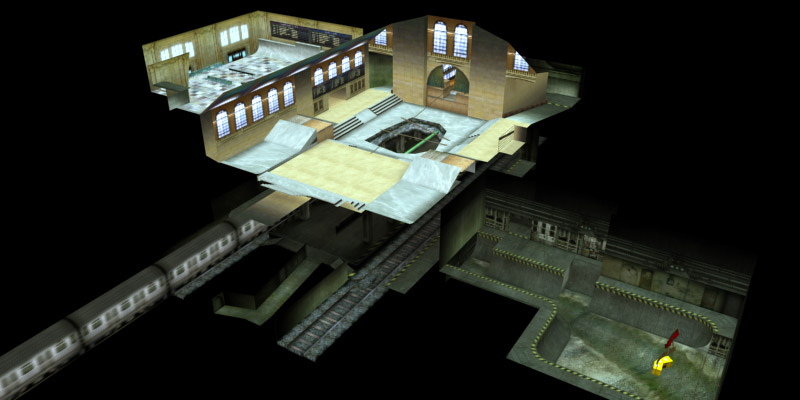 
Because the game content was designed to stream and run directly in a 2008-era browser, we were working under tight limits for modeling and textures. Our targets were six thousand tris' worth of geometry, twenty texture sheets, and the whole kit and kaboodle (also including NPCs, skyboxes, skate trick targets, and animations) exporting at around 600k. Needless to say, this required a whole lot of clever texture re-use and tiling, especially where we managed to sneak in baked-in lighting and shadows. 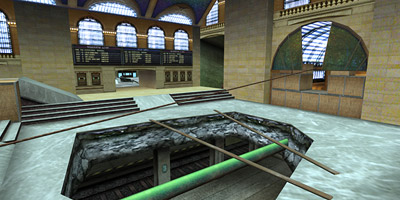 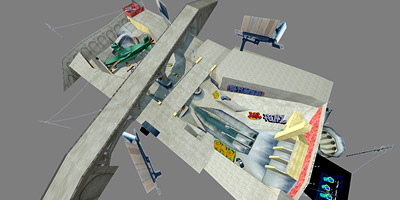 
Compare 2008's Grind Central Station to 2007's Spillway level and you'll see how far we came in that first year. When we were first starting out, the entire art department consisted of just me, and this river level was the one I slapped together to see just what we could and couldn't get away with in an in-browser engine. 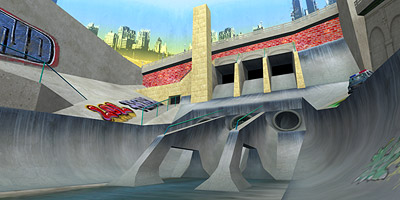 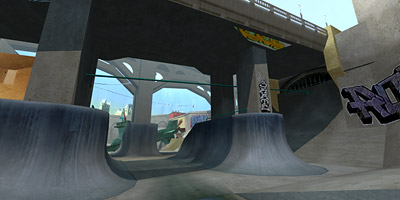 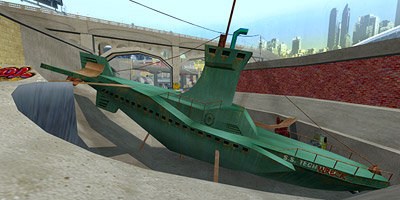 
In what was probably the last time I'll ever get to use my computer science background, I was the only guy in the office who understood both the engine code and the art pipeline, even after we'd fully staffed both the art and the engineering departments. As such, it was my job to figure out the limits of what the engine could handle, what it would cost us bandwidth-wise, and the best way to optimize between the two.

For example: Intersecting polygons, overlapping alpha textures, surface decals, and multi-textured objects? No, no, no, and no. No dynamic lighting either; all those cast shadows you see were carved in with polygons. On the other hand, a submarine inexplicably crashed in an urban spillway? Yes. For whatever reason, the sub wreck was a big hit in kid testing.

My big accomplishment in this regard was figuring out an optimization path to take the in-game level loading times from minutes down to seconds, often cutting load time by over 90%.

Team Efforts
While I did the modeling and texturing for Grind Central and the Spillway myself (with the later addition of some graffiti graphics by Paulo Ruvalcaba), we were already starting to fill out the art team pretty quickly (thank God). For the rest of the images on this page, credit goes as follows: 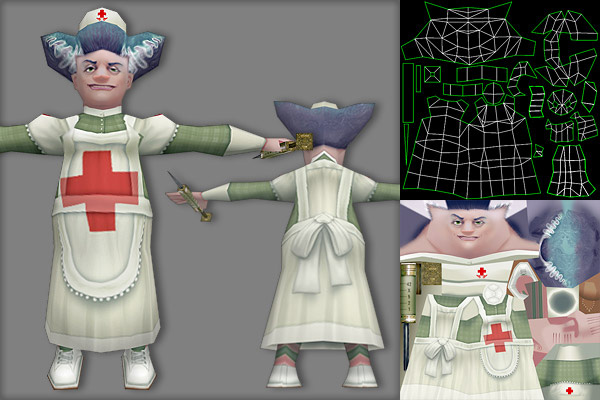 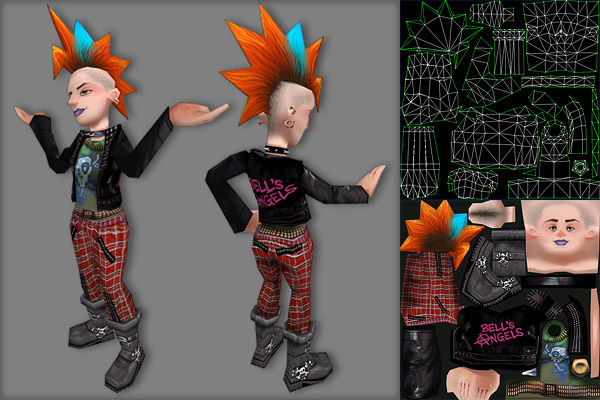 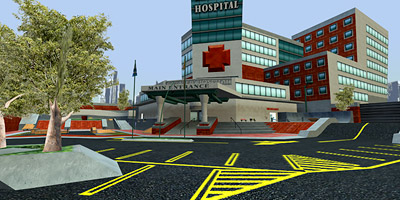 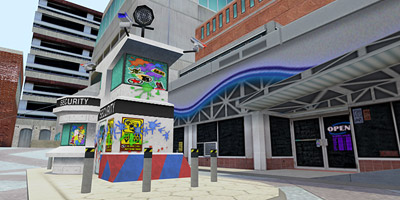 Except where otherwise noted, all works are copyright ©2002-2019 Mike Rayhawk.